As the battle for Guadacanal raged 800 miles to the east, the Japanese had neglected the defense of the Papuan Peninsula. Decisive action by the Allies could crush the Japanese forces in New Guinea and thereby permanently remove the enemy threat to Port Moresby.While the Australians continued to drive the enemy back along the Kokoda Trail, the American 32nd Division would swing around to attack in force the enemy left flank at Buna. The bulk of the attacking force was flown to the northern Papuan coastline and then carried by 20-ton motot launches to Pongani, 23 miles south of Buna. Early on 19 November, the 1st and 3rd Battalion, 128th Regimental Combat Team moved northward up the coastline and were repulsed by the Japanese. The 2nd Battalion moved westward through the jungle, skirting the enemy positions, and on 21 November attacked northward along the Ango Trail.
Attacker: American ("F" Company, 2nd Battalion, 128th Infantry RCT)
Defender: Japanese (3rd Battalion, 229th Infantry Regiment) 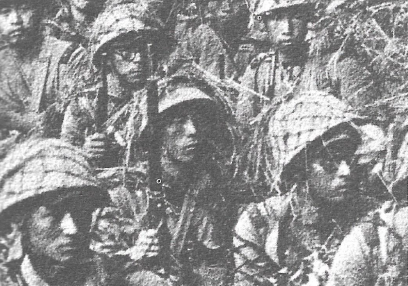