As night approached, there was still no word from Omaha Beach. Of his original 200 men, over a third were casualties, though many of the lightly wounded were staying in action. Supplies of grenades and mortar shells were low. And communication between the Point and the highway force was precarious. Despite their exposure, Colonel Rudder decided to leave the highway force in place. Rudder still expected the imminent arrival of the 5th Rangers and 116th Infantry. At 2330, the Rangers posted in front of the Company D-E corner were startled by a general outburst of whistles and shouts. A considerable volume of enemy fire soon opened up, with a machine-gun firing tracer from only 25 yards from friendly lines.
Attacker: German (Elements of the 726th Infantry Regiment)
Defender: American (Elements of D, E and F Companies, 2nd Ranger Battalion) 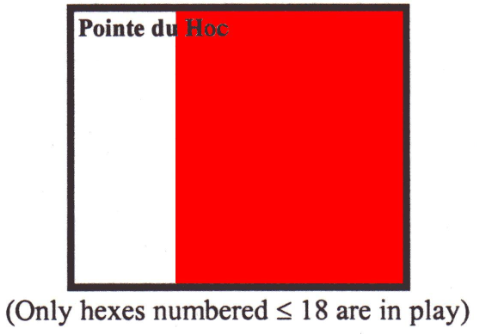