The Chasseurs ardennais were involved in notable actions on the Tenth of May, 1940. The first, at Chabrehez, by a company of the 3rd Regiment, against the advanced guard of Rommel’s 7th Panzer Division. The Chasseurs, under Lieutenant Lejeune and his platoon leaders, Gourmet, Cermer, and Catin, lacked any artillery support or tanks. In the initial attack by a lone German tank, some of Catin’s men tried to flee. Catin faced them down, pistol in hand, and ordered them back to their positions. The moment of panic passed, and Catin’s men forced the tank to withdraw with only small arms fire. Gourmet’s machine gunners were very successful in stalling the German attack. Faced with the volume of fire from the men of the Chasseurs ardennais, the German commander, Major Steinkeller, pulled back to await reinforcements. Unfortunately for the Chasseurs ardennais, Rommel made a habit of appearing wherever his key engagement was going to be, and here was no different. With the arrival of a motorcycle battalion and some tanks, Rommel was able to envelop the Chasseurs ardennais from the north and capture or kill many of them.
Attacker: German (7th Motorcycle Battalion)
Defender: Belgian (3rd RRegiment, Chasseurs Ardennais) 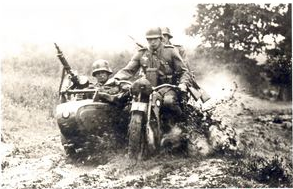