D-Day on Peleliu had just begun to reveal the new Japanese defensive plans that would be put into effect for the remainder of the war in the Pacific. Rather than throwing away men in suicidal banzai attacks, the Japanese defenders of Peleliu had constructed an intricate defense-in-depth, with mutually supporting positions covering every inch of the rocky, coral island. The USMC was in for one of its toughest fights of the war. One of the main objectives of the early attack was the large air strip, which would give US air power the range to strike the Philippines. The USMC 5th Marines, 3rd Battalion, Company I were tasked with taking the air strip. Pushing through the dense scrub that covered the island at this point, 3rd Battalion became separated from the 7th Marines and formed a deep salient reaching into territory. The isolated units were in danger of being cut off and surrounded by the Japanese. At the airfield, the Japanese counterattacked, using their tanks and infantry in an uncharacteristic combined arms attack -- an armored banzai.
Attacker: American (USMC) (Companies I & K, 3rd Battalion, 5th Marines and 710th Tank Battalion)
Defender: Japanese (14th Infantry Division) 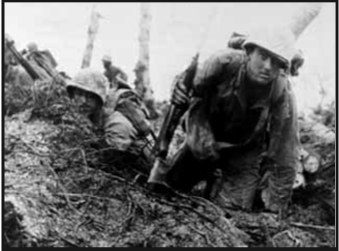