The Cameronians expected to find Grainville cleared by 11th Armoured Division. This expectation was confirmed by a squadron of the Fife and Forfars who believed the village was clear of infantry but warned of the possibility of enemy tanks. Fond hopes were rudely shattered at 20:00 hours, as D Company moved into the ruins, supported by two troops of 7th RTR. The place was enemy held, opposition was heavy, and three of the Churchills were quickly knocked out. All through the long summer’s evening, the battle raged to and fro over the ruins of the small town. Finally, the Cameronians and their supporting armour pulled back for the night, and shortly after so did the Germans. At midnight, the Cameronians’ M.O. and Padre ventured into the rubble to search for their wounded and found Grainville deserted. The Cameronians would be back.
Attacker: British (9th Battalion, The Cameronians (Scottish Rifles))
Defender: German (SS) (SS Panzer Division 12 "Hitler Jugend" and Kampfgruppe Weidinger) 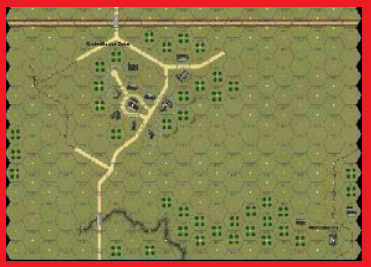