On April 11th, German Infantry Regiment 340 was redeployed south to Ostfold. Three columns proceeded down the west side of Lake Oyaren. A fourth column, commanded by Hauptmann Gutsche, was formed with orders to advance down the east side of the lake. Slowed by the many roadblocks created by felled trees, Detachment Gutsche approached Trogstad on the evening of the 13th. Waiting for them was another roadblock defended by Company Orre, formed from personnel from the Norwegian battalion at Fort Hoytorp. The Norwegians, armed with 2 Colt M/29 heavy machine guns, gave as good as they got.
Attacker: German (Elements of Gutsche Detachment)
Defender: Norwegian (Company Orre) 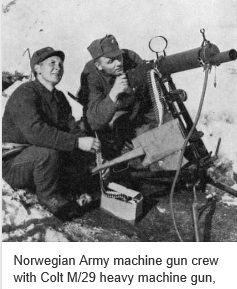