At Strongpoint D, Lieutenant Massin was coming back to his position, sited near the top of the hillside, after an inspection of his men's positions, when he saw a landed glider within a very short distance. At first Massin thought that it was a crashed airplane. Of the ten men around it, one stepped aside with a machine-pistol in hand. Massin identified him as German and quickly shot him with his own GP pistol. Running as fast as he could, Massin joined the nearest friendly position, the one occupied by his DBT mortar team. The first mortar rounds were aimed at a second landed glider, soon reduced to a buming wreck. Meanwhile, the Luftwaffe attacked the Belgians, destroying one of Massin's squads and forcing the DBT team to withdraw towards the squad at the upper left of the position. That squad withstood the enemy fire for a while, also containing the German advance by fierce counter-fire, but under heavy fire all the while, it finally withdrew towards the sunken road leading to the II Battalion PC. At that time, the squad at the left of the front had been ordered to move to a better firing position but was almost completely destroyed by airplane bombs.
Attacker: German (Elements of Sturmgruppe Eisen)
Defender: Belgian (Elements of 2nd Battalion, 2nd Grenadiers, 7th Infantry Division) 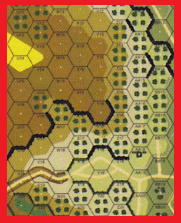