The veteran German 352nd Infantry Division, whose presence was missed by Allied intelligence prior to D-Day, had established a series of stutzpunkt along its narrow beach defense frontage. One such strongpoint was situated at the Vierville Draw. This terrain feature was a break in the hills overlooking Omaha Beach. On the morning of D-Day two right flank companies, C Coy., 2nd Rangers and A Coy., 116th Infantry, landed as scheduled in front of the Vierville Draw. After one landing craft foundered, and another was hit four times by mortar fire, the remaining men of the two companies struggled ashore. Many of them went over the side. Those fortunate enough to survive met well directed fire from the men of the veteran enemy unit. Small arms fire swept the beach. Within minutes, two-thirds of A Company were casualties. German fire took its toll on the men of C Company, too, with more than half of the Rangers added to the ranks of the dead and wounded soon after reaching shore. The survivors fought their way forward to the comparative shelter of the sea wall and the base of the cliffs. Matters were not improved when only eight of the original sixteen tanks assigned to this sector managed to reach shore after officers of the 116th decided the seas were too rough for DD tanks and sent their Shermans in on LCTs. Ultimate disaster was averted, but it wasn’t until 1000 hours that units were reorganized for the push inland. The men of the 116th advanced along the exit road while the Rangers made headway around the flank. By 1100 hours Vierville was finally cleared. The cost had been horrific.
Attacker: American (C Company, 2nd Ranger Battalion / A Company, 116th Infantry Regiment / Elements of the 743rd Tank Battalion)
Defender: German (Elements of the 3rd Battalion, 726th Regiment, 352nd Infantry Division) 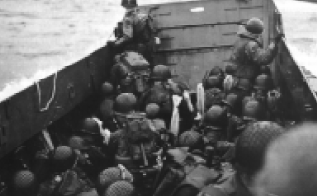