Despite the use of a combined-arms force, the final attempt to clear the Quatre-Bras crossroads had failed. The hulks of a dozen tanks littered the plain in mute testimony to the failure. Major Fraser, the CO of the nearby paratrooper force, re-grouped his men at the outskirts of a copse, near the railroad line. Visibility was bad, the terrain to cross was uphill, and the path of attack was densely wooded. Worse, the Americans faced an enemy that was dug in and in possession of numerous guns and automatic weapons. Progress would have to be slow and cautious. . .but without mercy.
Attacker: American (Task Force Fraser, 517th and 509th PIR)
Defender: German (116th Panzer Division) 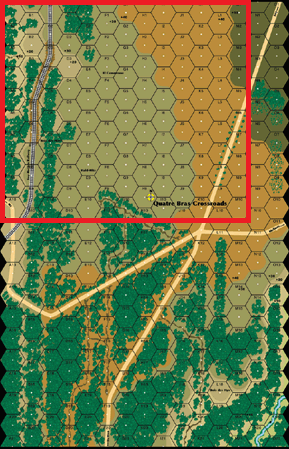