Panthers of 1/Panzer Regiment 35 were taking part in the battles to re-establish contact with Army group North. After the capture of Hill 920, the Panther commanded by Sergeant Christ developed a major oil leak. Consequently, when the rest of the unit moved off, there was nothing to do but wait for a tow back to the workshops. After a while, the rumble of tanks could be heard and Christ, not knowing that no German tanks remained in the area, decided to investigate. Some panzergrenadiers told him that they had seen some Russian tanks. Sergeant Christ confirmed this and nursed his tank into firing position.
Attacker: Russian (Elements of the 19th Tank Corps, 6th Guards Army)
Defender: German (Feldwebel Christ’s Panther, 1/35th Panzer Regiment, 4th Panzer Division and infantry support) 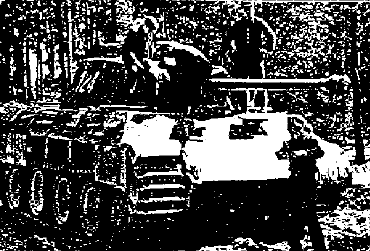