"Massacre in Paradise" -- The German pressure around the Dunkirk defense perimeter was strong. Among the assailants was the Totenkopf Division of the Waffen-SS. It was made up of members of the "Death's Head Groups", guard units from concentration camps. The formation of the division aroused the hostility of the Wehrmacht, which refused to equip it. Himmler finally obtained Czech cannons and machineguns for the division. On 27 May, the division isolated the soldiers of the 2nd Royal Norfolk Regiment to the south of the hamlet of Le Paradis. The British entrenched in a large farm and underwent shelling and assault by the men of 2nd SS Regiment, who began taking heavy losses. The defenders resisted throughout an hour, then, encircled, exhausted and short of ammo, they surrendered. One hundred prisoners were then lined up against a wall and shot down by the machineguns of 4th Company.
Attacker: German (SS) (2nd SS Regiment, Totenkopf Division)
Defender: British (2nd Royal Norfolks Regiment) 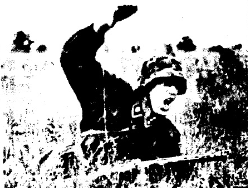