"Roses for Vandervoort" - The encirclement of the German troops of the Cotentin had just begun the previous day. The 507th Parachute Infantry Regiment and the 325th Glider Regiment were engaged along the D15 Road. After a good start, a vigorous German counterattack stopped the paratroopers cold. On the 15th, it was the turn of the 505th PIR to attack after crossing the 507th positions. The 1st Battalion attacked north of the D15, and the 2nd along the road itself. The Germans stiffly resisted at first, but once this resistance was broken, the 505th advanced quickly. After 700 meters of progression, they met a fortified strongpoint in the hamlet of Les Rosiers. The position seemed to tough to break without more support. Until Colonel Vandervoort went to the 1st Battalion HQ and "loaned" 2 Shermans to the cause.
Attacker: American (D, E and HQ Companies, 2nd Battalion, 505th PIR, 82nd Airborne/Company A, 746th Tank Battalion)
Defender: German (1st Battalion, 1058th Infantry Regiment, 91st Luftlande Division) 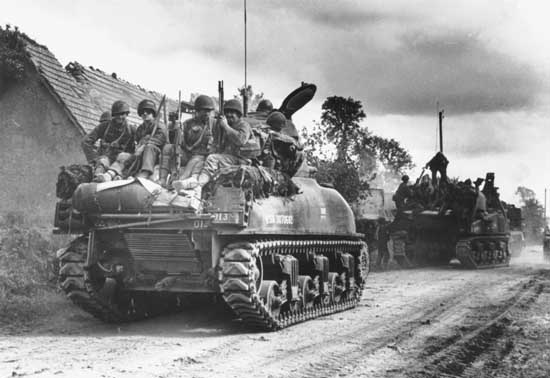