"The Cavalrymen" -- The last major mounted unit in the German Army, the 1st Cavalry Brigade, participated in the invasion of Poland. It was part of the Wodrig Corps, belonging to the 3rd Army in East Prussia, which must capture the Polish fortress of Mlawa before breaking through to Warsaw. The brigade operated in a wooded and marshy area crossed by bad roads, but where the horses could advance with relative ease. The unexpected resistance experienced at Mlawa forced the Germans to circumvent the position, and the cavalry, supported by the men of the 12th Infantry Division, collided with a Polish Cavalry Brigade “Mazowiecka” positioned on the flank of the fortress. A series of engagements then commenced along the river.--- Victory conditions: The German player wins if there are < 4 Good Order Polish Squads/HS or Crew equivalents in buildings south of row V, having inflicted at least as many CVP as they have suffered.
Attacker: German (Elements 2nd Cavalry Regiment)
Defender: Polish (5th Battalion of Fusiliers) 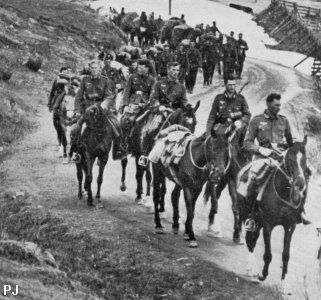