During the Battle of Berlin, the Weidendammer Bridge was one of the few Spree crossings that had not been destroyed. On the night of 1 May 1945, a Tiger tank from the 11th SS Panzergrenadier Division Nordland spearheaded an attempt to storm the bridge to allow hundreds of German soldiers and civilians to escape across it. Word had spread of the breakout and many hundreds of SS, Wehrmacht soldiers and civilians had assembled. It was a gathering which Soviet troops could not fail to miss. The first mass rush, led by the Tiger tank, took place just after midnight, but although the armored monster managed to smash through the barrier on the north side of the bridge, they soon ran into very heavy fire in the Ziegelstrasse beyond. An anti-tank round struck the Tiger and many of the civilians and soldiers in its wake were mown down. Bormann and Dr. Stumpfegger were knocked over by the blast when the tank was hit, but they recovered and went on. Another attack over the bridge was made soon afterwards, using a self-propelled 20mm quadruple flak gun and a half-track. This too was largely a failure. A third attempt was made at around 1 a.m., and a fourth an hour later.
Attacker: German (SS) (Remnants various SS units, Berlin Volkssturm & fleeing civilians)
Defender: Russian (Elements 3rd Shock Army) 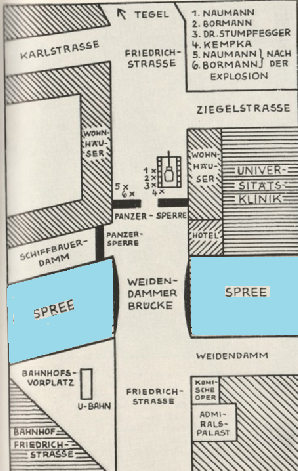