The Battle of Poznań (Battle of Posen) during World War II in 1945 was a massive assault by the Soviet Union's Red Army that had as its objective the elimination of the Nazi German garrison in the stronghold city of Poznań in occupied Poland. The defeat of the German garrison required almost an entire month of painstaking reduction of fortified positions, intense urban combat, and a final assault on the city's citadel by the Red Army, complete with medieval touches. In bitter combat that saw the outlying forts reduced and city blocks seized, the Soviets succeeded in pushing the German defenders towards the city center and the citadel. By the beginning of February 1945, most of the city had been captured, and by 12 February, the Germans held only the imposing citadel. The final Soviet assault on the citadel started on 18 February. Before the Red Army troops lay a deep ditch matched by a steep rampart on the far side. In an odd echo of medieval warfare, the Soviet forces used ladders to cross this obstacle, but found themselves swept by fire from the citadel's redoubts. These redoubts took the better part of three days to neutralize; one silenced by flamethrowers and explosives, the other's line of fire blocked by debris thrown in front of the firing ports by exasperated Soviet troops. Having built an assault bridge, Red Army tanks and assault guns crossed into the main grounds of the citadel early on 22 February, commencing the final struggle for the old fortress. At this point, Generalmajor Gonell gave his troops permission to attempt to escape, but it was too late. Gonell refused to be captured and committed suicide by lying down on a flag and shooting himself in the head. That evening, Generalmajor Mattern, once again in charge of the German forces, surrendered the remaining 12,000 German soldiers to General Chuikov.
Attacker: Russian (Elements 74th Rifle Division & 261st Special Sapper Brigade)
Defender: German (Posen Garrison) 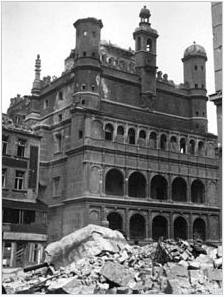