On 26 February, a T26E3 Pershing named Fireball was knocked out in an ambush at Elsdorf while overwatching a roadblock. Silhouetted by a nearby fire, the Pershing was in a disadvantageous position. A concealed Tiger tank fired three shots from about 100 yd (91 m). The first penetrated the turret through the machine gun port in the mantlet, killing both the gunner and the loader. The second shot hit the gun barrel, causing the round that was in the chamber to fire with the effect of distorting the barrel. The last shot glanced off the turret side, taking off the upper cupola hatch. While backing up to escape, the Tiger became entangled in debris and was abandoned by the crew. Fireball was quickly repaired and returned to service on 7 March.
Attacker: American (2nd Battalion, 13th Infantry Regiment and F Company, 33rd Armored Regiment (Task Force Welborn), CCB, 3rd Armored Division)
Defender: German (Schwere Panzerkompanie Hummel and elements of Panzer Division 9) 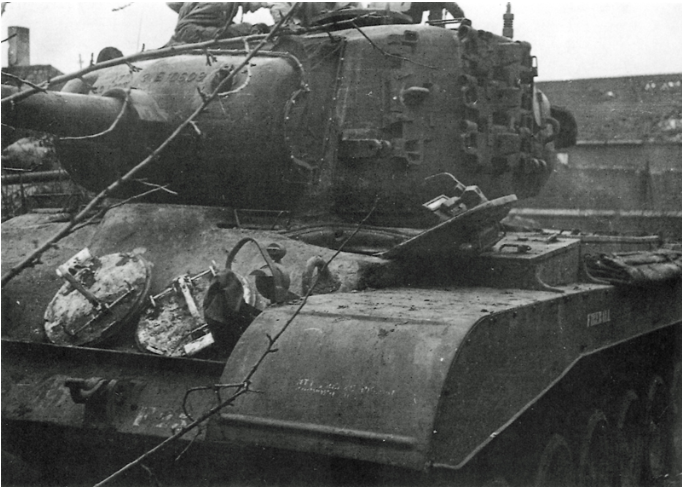