The Fourth Anny was collapsing. and its commander, General von Tippelskirch, disobeyed directives to stand fast and ordered his Corps to retreat to the Berezina River. By 27 June it became evident the 3rd Belorussian Front was closing in on Minsk. but they would have to first cross the Berezina River. Panzer Division 5 arrived on 27 June and was positioned 65 miles northeast of Minsk at Krupki with the mission of keeping escape routes over the Berezina open for as long as possible. The division lacked its Panzer Regiment, which was still unloading at the railyard, but was reinforced by Heavy Panzer Battalion 505. The 3rd Guards Tank Corps. the spearhead of 3rd Belorussian Front, moved toward Krupki Station and attacked with 70 armored vehicles. They stumbled into an lnferno at Krupki facing the deadly 88rnrn guns.
Attacker: Russian (Elements of 3rd Guards Tank Corps)
Defender: German (Reinforced elements of Panzergrenadier Regiment 31, Panzer Division 5) 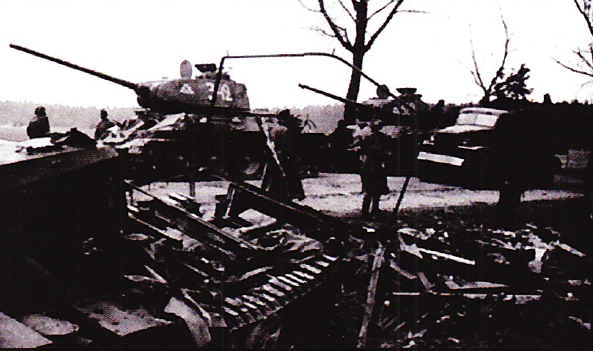