Although the Hitlerjugend teenagers had received less training than their predecessors, they were still fired with the fanaticism that those outside of the world of the Hitler generation could not fathom—and these young boys were well-led by hardened combat veterans. The combination, along with the nickname Panzer-Teufel (“Tank Devils”) the unit hung on itself, would soon surprise the British, unaware that these boys embraced a philosophy, printed in their pamphlets, with concepts including, “killing is a sport” and “killing is your duty.” And the ultimate, “Panzer-Tuefel always shoots first! The man who shoots first lives longer!” In the Stolzenau area the soldiers of the 11th Armoured did not fare well, and received a clear message that the Germans intended to hold the area—via the fierce resistance put up by the teenaged SS Panzergrenadiers of 3, 5, 7 and 10 Kompanies, SS-Ausb.u.Ers.Btl.12.HJ supported by light Flak and 88mm Flak from the RAD battery 5./280
Attacker: British (8th Battallion, the Rifle Brigade, 29th Armored Brigade, 11th Armored Division)
Defender: German (SS) (Kompanie 5, SS Ausbildungs und Ersatz Bataillon, 12th SS Hitlerjugend and Batterie 5, RAD Flakabteilung 280) 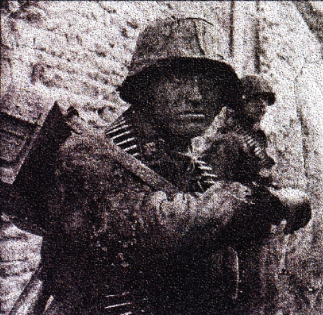