Following the successful assault across the Weser River on April 9th, the 6th Battalion of the Royal Welsh Fusiliers sat tight in the bridgehead, awaiting orders. On the morning of the 10th the battalion was ordered to clear the zone between the Weser and Aller, south of the line Eystrup-Rethem. The men of the 6 RWF were to push forward quickly, accepting all risks, in hopes of catching the Germans on the run. For this effort a tank contingent consisting of four Cromwells and a Sherman Firefly from C Squadron, 5 RTR, would be attached. Armed with faulty intelligence, it was expected that the first few miles through the woods could be covered on the double, with everyone hitching a ride on the deck of a tank. Upon reaching a junction in the road, and seeing a tree felled across the road, the tanks "...slowed down to check the map when all hell broke loose!" The forward leading British soldiers and tankers found themselves in the crosshairs of an ambush laid by German Marines.
Attacker: British (Elements of the Royal Welsh Fusiliers and the Royal Tank Regiment)
Defender: German (Elements fo 14./5, 2nd Marine Infantry Division) 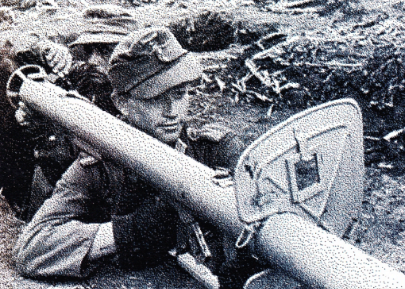