VASL Board below in USER FILES. . . .With the main Japanese assault by the Colonel Magata’s 1st and 3rd Battalions about to hit the 37th Division’s 2nd Battalion, 129th Infantry, both sides needed to know the intentions or positions of the other before the big battle broke. Recons in force were ordered and clashes erupted in the lowlands near the hills along the Logging Trail.
Attacker: Japanese (Elements of the Magata Force, 1st Battalion, 45th Infantry Division)
Defender: American (Elements of the 2nd Battalion, 129th Infantry Regiment, 37th Division) 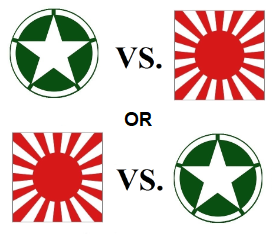