Waffen-SS I: No Quarter No Glory!

Published by: Heat of Battle. January 1998
(Log in to add this module to your collection
or to see your play details)

The six scenarios in this package are representative of the many combat actions which the Waffen-SS subjected their European enemies to. Statistically, the German Army proved to be the most formidable armed forces ever known to modern warfare. At the end of the war, statistics showed that, regardless of whether the German ground forces won a battle or lost it, whether they outnumbered their enemy or even if they, themselves, were outnumbered, the German Army inflicted fifty percent more casualties on the enemy than they suffered. The Waffen-SS units were even deadlier by doubling what their Army counterparts achieved. Within this package you will see just how awesome was their fight.

These scenarios represent the Waffen-SS as hunter and hunted, hero and hated. They are some of the most vicious battles fought during World War II, and they cover the full spectrum of the Allied fight against Hitler.

The first edition of this set also featured white-on-black counters representing the SS. 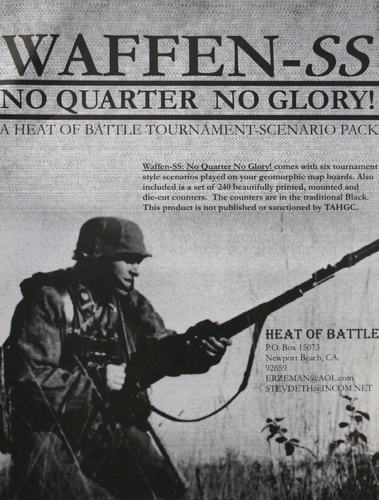