A Japanese roadblock has cut the retreat path of an Australian infantry company that is protecting an artillery battery. These mixed elements must clear the roadblock to continue the retreat towards Singapore during the Malayan Campaign. ACTUAL HISTORY: Two below-strength battalions, the 2/29th and 2/19th, a battery from the 2/15th Field Regiment and a depleted Indian contingent, but without any tanks, against a force of more than 10,000 Japanese Imperial Guards and 60 tanks pushing down the Malay peninsula to Singapore. Charles Anderson, a lieutenant-colonel who won the Victoria Cross, ordered his men to withdraw to Parit Sulong, where British forces held the bridge. The men fought with bayonets through road blocks, singing Waltzing Matilda, only to find the British, short of rations and believing themselves cut off, had withdrawn. The Japanese had taken the bridge. After several suicidal, vain attempts to retake it, the Australians were in a hopeless position. Anderson ordered "every man for himself". It was a difficult decision. He had to leave 110 Australian and 35 Indian wounded, hoping the Japanese would care for them or allow the Red Cross to do so. But they were massacred by the Japanese. The wounded were machine-gunned and bayonetted and their bodies set alight.
Attacker: Australian (2/19 Bn, 22nd Australian Brigade and the 45th Brigade)
Defender: Japanese (Elements of Kunishi Pursuit Unit (4th Inf. Regiment) Konoe Imperial Guards Division) 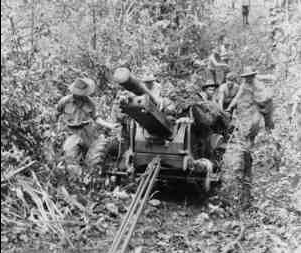