Sitting astride one of the few north-south roads in the Hurtgen Forest, the small town of Wittscheid became vital for both the Germans and the Americans. By the morning of the 10th, the town had already changed hands twice, with the fighting centered around the administration building of a large sawmill. German engineers, reinforced by policemen from Dueren, had wrestles control away from the Americans and prepared to meet another attack. The American attack came late in the afternoon. Now backed by three medium tanks, the men of the 3rd Battalion, 39th Infantry stormed the town.
Attacker: American (Elements III/39th Infantry Regt., 9th Infantry Division)
Defender: German (Elements 275th Pioneer Btn, 275th Infantry Division and Dueren Polizei Battalion) 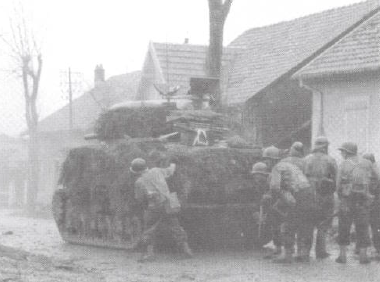