Hurrying down the Utrechtseweg towards Arnhem, 3 Battalion were surprised by a German staff car rolling through the intersection in front of them. Many of the men in the lead platoon opened fire, killing Arnhem Commandant General Kussin and his aides. As the echoes of gunfire faded away, the now-primed men of 3 Battalion moved on. As they neared the next crossroads they suddenly came under fire themselves. Blocking the way was a German position centered on a self-propelled gun, part of SS Major Krafft’s No. 2 Company. B Company’s No.5 Platoon was in the lead and quickly took several casualties, including the platoon PIAT. None of Lt. Cleminson’s men had primed Gammon Bombs to hand, so with no real way of tackling this menace the men scattered and sheltered in some nearby houses and gardens. Major Waddy tried to launch an attack, but found the fencing between houses made maneuver very difficult. The paras engaged the Germans with their Brens and Stens while others hurriedly tried to turn an exposed supporting 6-pounder anti-tank gun. The German SPG blew up the Jeep, striking down the gun crew an instant before it could fire. After this brief but intense gunfight, No. 2 Company pulled back, afraid of being outflanked by the paratroopers, taking with them a number of British prisoners. 3 Battalion hitched up their gear and moved on, already far behind schedule.
Attacker: British (B Company, 3rd Battalion)
Defender: German (SS) (2nd Company, 16th SS Training Battalion) 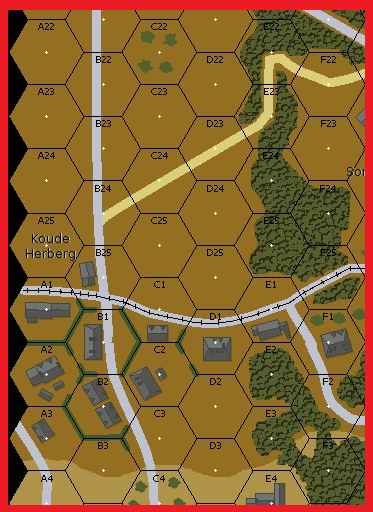