On the 14th, the 3rd Spahis Brigade received orders to form a defensive line and hold the village of La Horgne, at whatever price. Without their AT weapons and low on personnel, the brigade occupied La Horgne around 4 AM on the 15th. The Spahis immediately dug in, and prepared their defenses. The erected four barricades, established fire lanes, dug trenches and foxholes, and set up their three AT guns. At dawn, the sound of motors could be heard coming from the Singly road, signaling the arrival of the Germans. . .The Germans get 25 squads (including a few motorcycle riders), OBA, 13 AFVs and 8 trucks. The defending French have 29 squad-equivalents (mostly elite, some cavalry), a 10-3 leader, 2 25mm AT guns, 2 x HMG,and some fortifications.
Attacker: German (Reinforced elements of III./Schutzenregiment 1 and Pz Aufkl. Abt. of 1.Panzerdivision XIX A.K. 9mot.) and 1./Schutzenregt 1 and Panzerbrigade 1 of 1.Panzerdivision)
Defender: French (Elements of Escadrons de Spahis, 1er Ordons, 2eme de Jorna, 3eme Kuhn, Mitrailleuses de Combourien of 2eme RSA and elements of 1er Escadron Maitre and Peloton de mitrailleuses of 2eme RSM of 3eme Brigade de Spahis) 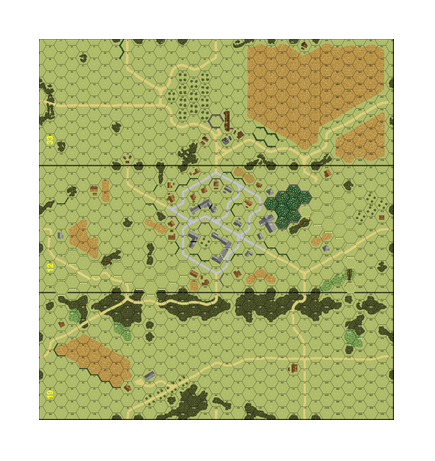