"Dies Irae" - a Latin hymn sung in a Mass for the dead. . . . Before noon the badly needed German reinforcements began to reach the Italian sector: the 318th Infantry Regiment and an independent Panzer Group from 10th Panzer Division, consisting of 75 AFVs. General Marazzard, commander of the 3rd Celere Division, asked the XLIX HQ to immediately commit their forces in a quick counterattack on Orlovo Ivanovka. But the Germans hesitated, wasting precious time. When they finally agreed and joined the remnants of the XVIII Bersaglieri it was too late; the Russians had been given the time to exploit their breakthroughs and regroup to defend their gains. Nevertheless, in the early afternoon, under a gathering storm, the Bersaglieri, two battalions of the 318th, and a clutch of panzers moved to Orlovo Ivanovka. Despite extreme weather conditions and fierce Russian resistance, the attack began. . .
Attacker: Italian / German (Elements of 3rd Bersaglieri, XVIII Battalion and I Battalion, German 318th Regiment)
Defender: Russian (Elements of the 367th Regiment, 136th Division) 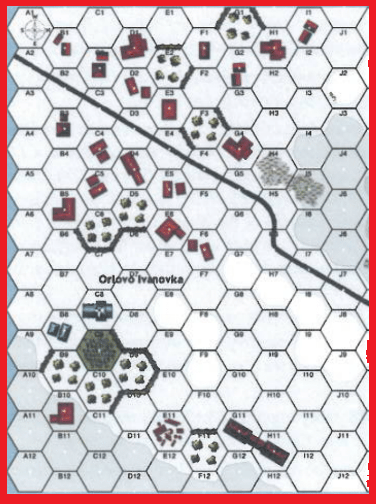