The Kummersdorf Proving Grounds facility, the German Army’s main weapons testing and development center, was located at Kummersdorf Gut, several kilometers south of the actual village of Kummersdorf. With the Russian 3rd Guards Tank Army approaching rapidly from the south, OKH had assembled all of the remaining mobile vehicles at Kummersdorf Proving Grounds into a makeshift panzer company. As a part of Kampfgruppe Möws, Panzer-Kompanie Kummersdorf was dispatched to block the Russian 6th Guards Tank Corps at Baruth, not far to the south. A heavy battle ensued just as the panzer company was detraining there. To avoid the fierce fighting at Baruth, the 7th Guards Tank Corps bypassed the town wide to the west to get past some heavily wooded marshy areas. Directly in its path lay the proving grounds, and the staff hurriedly mustered all able-bodied personnel into an ersatz Volkssturm company. In addition to an 88L FlaK gun, the defense was bolstered by an immobile prototype Porsche Tiger tank towed into a firing position. Though immobile, the experimental Porsche Tiger was armed with a fearsome 8.8cm L/71 gun, an unpleasant fact the Russian tankers would soon discover. The Volkssturm company was dug in along the edge of the proving ground ranges, and also in position to guard the worker’s barracks just north east of the proving ground facility. The Russian 7th Guards Tank Corps’ approach was down heavily forested roads.
Attacker: Russian (Elements of 7th Guards Tank Corps)
Defender: German (Elements of Volkssturm Ersatz-Kompanie, Kummersdorf Panzerlehr-und-Versuchsgrupp) 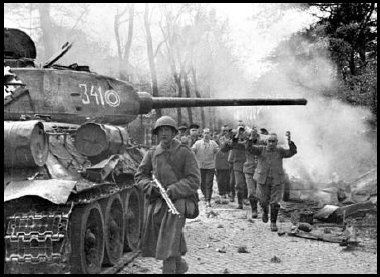