Reworking of "Time For Lunch" snow added. . .Locked at the bottom of a steep slope leading down from the sinister Baugnez road junction, the little town of Ligneuville was occupied by the 49th AAA Brigade HQ along with company kitchens, supply trucks and some troops and tanks of the 9th Armored Division doing repair work on tank tracks. Suddenly in the early afternoon, a tankdozer came flying down the hill at breakneck speed announcing imminent danger. As sounds of battle were heard coming from somewhere to the north, General E.J. Timberlake and his staff decided to leave at once. The incredulous officer in charge of the 9th Armored supply column went up the hill to investigate and. . was captured while standing face to face with German tanks. . .
Attacker: German (SS) (Elements of Kampfgruppe Peiper)
Defender: American (Elements of CCB, 9th Armored Division and 49th AAA Brigades HQ) 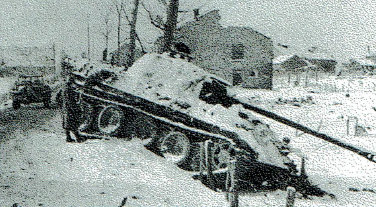