During the initial phase of the Petsamo-Kirkenes Offensive, the Soviet 14th Army’s objective was to rapidly advance to Petsamo and Luostari and attempt to cut off the retreat of German forces. Unfortunately there were only two roads in the sector, the ‘Russian Road’ leading to Petsamo, and the ‘Lanweg’ leading to Luostari. The terrain was mostly tundra, with hills, brush and rocky outcroppings. This confined the main advance, and especially the armor, to the two roads. The advance along Lanweg was slow, and finally a bridgehead was established across the Titovka River. To continue the attack, the 99th Rifle Corps placed all the available armor at the disposal of the unit leading the attack, the 65th Rifle Division. The armor included KV-85 heavy tanks and ISU-152 assault guns.
Attacker: Russian (Elements of the 65th Rifle Division, 99th Rifle Corps, Soviet 14th Army and elements of the 73rd Separate Guards Heavy Tank Regiment and 378th Guards Heavy Self-Propelled Artillery Regiment)
Defender: German (Elements of 2. Gebirgs-Division, XIX Mountain Corps) 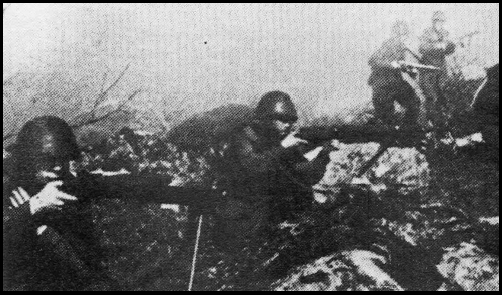