WITCHES CAULDRON—THE OOSTERBEEK PERIMETER is a new variant historical module that allows you to recreate the classic struggle of the Battle of Arnhem on a never-simulated-at-this-scale rendition of the battlefield. And to do it in the ultimate detail, house-by-house, at 50 yards scale. This game does not purport to answer whether Monty’s bold gamble to cross the Rhine and break into the heart of Hitler’s Third Reich could have succeeded. Nor does it have anything to do with whether ‘Market Garden’ aimed one or more bridges ‘too far’. Instead, WITCHES CAULDRON—THE OOSTERBEEK PERIMETER puts the gamer literally inside the hexenkessel, hammered by two Waffen SS panzer divisions day after day. There is no escape nor respite and this game is not suggested for the faint of heart. If you are ready to travel back in time, to recreations of the very places in history where most of the Arnhem Victoria Crosses were earned in pitched combat, while staring down the dark menace of massive King Tigers, Sturmgeschutz, and a smorgasbord of captured AFVs ranging from Dutch armored cars to French flame-throwing tanks—then this game is for you.

Historical maps are what CH is all about and WITCHES CAULDRON—THE OOSTERBEEK PERIMETER continues that tradition in grand style. The game maps were created on-site by designer Kurt Martin with assistance from CH researchers and Dutchmen Jack Westman and Hans Korting, the team spending over a year mapping every land-form and terrain-form. The resulting 36” x 48” playing area breaks new ground in the tactical-level game genre and is detailed and extensive.

THIS IS NOT A COMPLETE GAME! Ownership of Beyond Valor and West of Alamein or For King and Country are required to use this product. 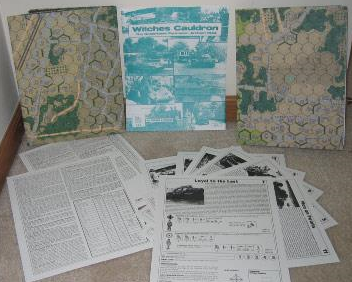