Published by: Multi-Man Publishing. June 2008
(Log in to add this module to your collection
or to see your play details)

From package:
Normandy, France 1944. After months of planning and preparation, the "Second Front" is finally opened on June 6 on the shores of Normandy. Almost immediately Allied forces begin to experience firsthand what Allied planners had, in their preoccupation to get ashore, failed to recognize-that the ancient Norman hedgerows would present the Germans with a supreme defensive asset. On June 8, General Omar Bradley characterized the terrain as the "damndest country I've seen". He was referring to bocage country, a hellish green maze of narrow roads and open fields bounded by nearly-impenetrable earthen mounds anchoring tangled hedges and dense stands of trees.

ASL Action Pack #4 – Normandy 1944 is a scenario bundle featuring action in the bocage country of Normandy after the D-Day invasion. The scenarios represent a wide variety of situations involving German, American, British and Polish forces. In addition to three new mapboards (53, 54 and 55), AP4 also comes with revised rules pages B9 and B10 which have been greatly expanded with clarifications and new examples of play covering Wall Advantage and Bocage. 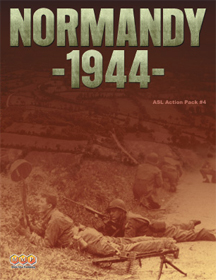