Published by: Critical Hit. January 2001
(Log in to add this module to your collection
or to see your play details)

Genesis 48 tells the story of a war unlike any before or since. Kibbutzniks defending their homes, fighting alongside their wives. Homemade armored cars trundling into battle. Davidka mortar shells exploding with terrifying shrapnel--due to the soft metal used in the underground shops--with unexpectedly deadly results. The 1948 siege of Jerusalem. Numerous, well-equipped but poorly organized Arab armies.

It's all here in Genesis 48 in a well-researched and extensive module presentation. Three sheets of color die-cut counters include 20 troop-types ranging from elite Israeli Palmach soldiers to Moslem Brotherhood conscripts. Israeli Molotov Tank Hunting Heroes. And more. You also receive numerous new vehicles, including 3 types of Israeli Homemade armored cars, Davidka and Parosh mortars, the Marmon Herrington IV, Jewish 'Sandwich Car' APC, and a variety of half-tracks up-armed with small turrets and a variety of armaments. You also receive a 22" x 34" historical map of Old Jerusalem, a color overlay of a kibbutz, three color card-stock play aids and a 32-page VARIANT rulebook full of vehicle and ordnance notes. All of this equipment is provided to use with the Jerusalem Campaign Game and the 15 well-tested scenarios provided. 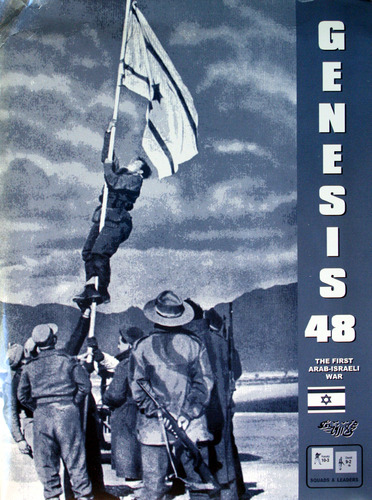