The Soviet wave swept inexorably toward the borders of the Reich—but in those isolated instances where replenished German armored units were encountered, they still proved masters of the battlefield. During the night of August 14th, the 3rd Panzer Division detrained at Kielce in southern Poland to halt the advance of a Russian breakthrough during the collapse of Army Group Center. In order to allow his division the time it needed to prepare for the counterattack, and to ready the path, the German commander formed an armored task force from the first units unloaded. The mixed force was placed under the command of Lt. Zobel who was ordered to seize the bridges at Ostroviec in preparation for the division’s advance on Opatov. On his first approach, however, three Panthers were lost to enemy fire and he fell back into nearby woods. Realizing that the element of surprise had been lost, and pressed for time, Zobel decided to boldly attack again before the Russian garrison was reinforced. As part of his task force created a diversion to the south, Zobel led a contingent of Panthers and infantry which forced entry into the town.
Attacker: German (6th Company, 6th Panzer Regiment/188th Infantry Regiment)
Defender: Russian (113th Guards Infantry Regiment) 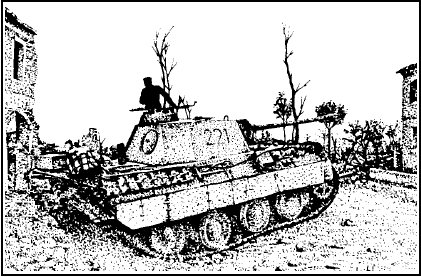