By the end of 1944, the German offensive in the Belgian Ardennes was definitely stopped. But the Allies still had to push the Germans back behind the Siegfried Line before they could resume their strike into the Reich. While its sister regiments were plowing south over the hills, the 120th Regiment was locked in a bitter three-day struggle for Thirimont, a ridge village which controlled the east flank of the attack.
Attacker: German (Abteilung 1, Fallschirmjäger Regiment 9, and Panzerjager-Abteilung 519)
Defender: American (1st Battalion, 120th Inf. Regiment / B Company, 743rd Tank Battalion / B Company, 823rd Tank Destroyer Battalion; and C Company, 105th Combat Engineer Battalion) 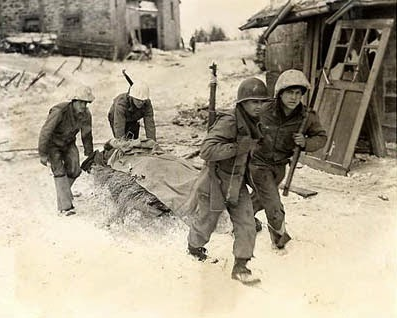 US soldiers carry a wounded German soldier to an aid station on a litter sled in Thirimont.