The British beach-head solidified quickly after the initial Normandy landings. Efforts were soon launched to break out of their narrow strip of the Allied “lodgement” along the coast. In the Canadian zone, troops found themselves in bitter fighting with several elite German units. Both sides accused the other of shooting prisoners and “No Quarter” was soon the order of the day. On June 12, the 23rd Hussars drove forward from the beach-head with Canadian soldiers of the Queen’s Own Rifle Regiment clinging to the back and sides of the Sherman tanks. It soon dawned on the infantry on the lead tanks that they were rolling through cornfields full of Nazi soldiers. The ‘Queens’ jumped off as the tank drivers gunned their engines and charged for their objective at Le Mesnil Patry. The Canadian foot soldiers were left to fend for themselves in the midst of a determined enemy possessing the advantage. The young troopers of SS Hitler Jugend ground forward in grim, close quarter fighting. . .
Attacker: Canadian (Elements of the Queen's Own Rifle Regiment)
Defender: German (SS) (Elements of the 12th SS Hitler Jugend Division) 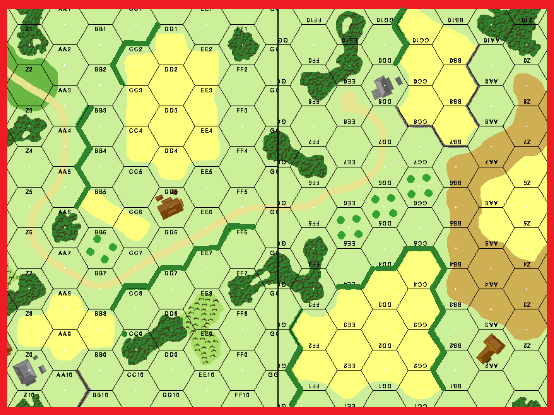