The 2nd Panzer Division stood within 6 km of the Meuse River. The entire division was low on fuel and fatigued from continuous fighting. General Collins disregarded orders and sent the 2nd Armored Division in for the attack. The 82nd Recon Battalion was sent to the western flank of the attack, and was to screen toward the west as far forward as the Lesse River, south of Celles. On 25 December, the 2nd Panzer Division Recon Battalion and part of the Division’s artillery had bivouacked near the quiet farming village of Foy-Notre Dame.
Attacker: American (82nd Recon Battalion, 2nd Armored Division)
Defender: German (Panzer Aufklaerung Abteilung 3, 3rd Panzer Division) 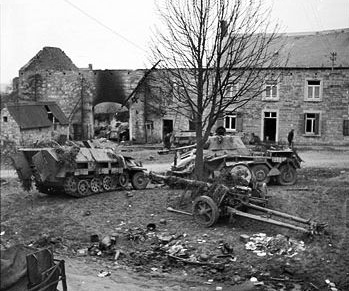