When the Eastern Front stabilized in summer 1942, the Germans were left in possession of Velikiye Luki. The town, both a solid ground in the surrounding marshes and a bridgehead over the Lovat River, was also a major regional rail crossroads. By mid November, the Soviet Kalinin Front launched a major offensive that surrounded and cutoff a large portion of the LIX Korps in Velikiye Luki – only days before a similarly successful but somewhat larger encirclement took place in Stalingrad. With OKH attention and assets diverted on Stalingrad, the entrapped men in Velikiye Luki were left alone to defend their perimeter against repeated assault. With their back to the Lovat River, General Von Der Chevallerie’s soldiers fortified their positions, organized themselves in hedgehogs, and prepared themselves to deny the Russians the strategic city as long as they could. The Soviets enjoyed a 5 to 1 numerical superiority and tried to muscle their way through the German defensive network. The swamps impeded armor movement in many places, so more often than not flesh replaced steel. Firepower superiority, prepared MG firing fields and fortified defensive positions allowed the German defenders to extract a heavy toll on the advancing Soviets.
Attacker: Russian (249th Estonian Division, 8th Estonian Rifle Corps/9th and 46th Guards Divisions, 3rd Shock and 5th Guards Army, Kalinin Front)
Defender: German (Infantry Division 83 and Gebrisjäger Division 3, Chevallerie Army Group, LIX Korps) 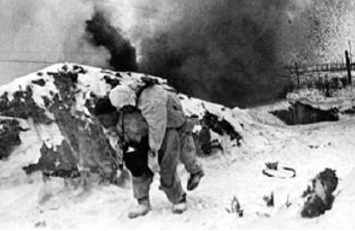