Although the German spearhead had been blunted at Prokhorovka, the thrusts of SS-Panzerkorps II would continue to push forward for another day. However, General Rotmistov was now gaining the initiative, and the armored battles would be under circumstances of the Russians’ choosing. The Soviet tankers’ tactics of closing in to neutralize the gunnery advantage of the panzers was working, although loses were heavy on both sides. Further counterattacks by 5th Guards Tank Army would follow the pattern set in previous days, and intense, close quarter fighting would be the norm in the villages and fields around Iamki. Striking hard at the German right flank, the Russians managed a breakthrough at Storozhevoc, briefly encircling the town before a counterattack by Abteilung1 of SS-Panzergreandier-Regiment 2 forced them back.
Attacker: German (SS) (Abteilung II, SS-Panzergrenadier-Regiment 2)
Defender: Russian (9th Guards Airborne Division/25th Tank Brigade/53rd Guards Heavy Tank Regiment) 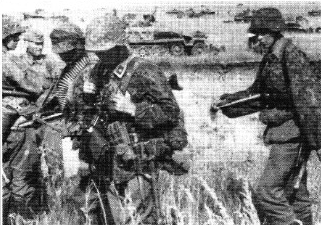