The job of the 1st Battalion, 28th Regiment, 5th Marine Division on D-Day February 19th on Iwo Jima was to fight east to west across the southern neck of the island to isolate Mount Suribachi. The area just off the beach at the base of Mount Suribachi was a moonscape of shell craters and brush. Company A of the 1st Battalion was to have been the battalion reserve ; however it was soon called forward to assist in the attack as casualties mounted. Among the men of Company A was Tony Stein. Stein had been a toolmaker in civilian life. This now served him well, as he had fashioned a personal, hand held heavy machine gun from the wing gun of an old wrecked Navy fighter back on Hawaii. Stein called the weapon his 'stinger'. With a network of pillboxes now blocking his Company's path, Stein and his 'stinger' went to work.
Attacker: American (USMC) (28th Marine Regiment, 5th Marine Division)
Defender: Japanese (312th Battalion, 2nd Mixed Brigade) 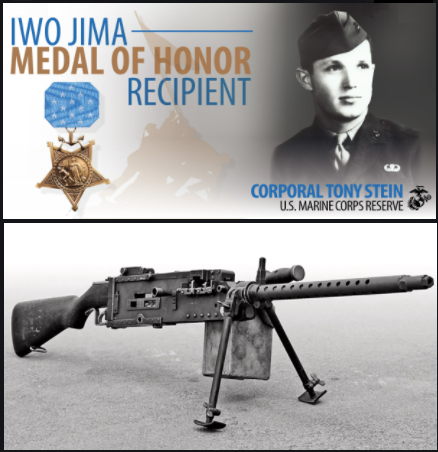