The 4th Ukrainian Front’s summer offensive had already liberated most of Galacia. Now the task at hand was to clear out Ruthenia and invade Hungary – perhaps knocking the Axis ally out of the war for good. A major barrier to this plan, however, was the imposing Carpathian mountain range where the Hungarian defenses utilized a series of fortified “lines” covering the mountain passes. Under pressure from the advancing Russians, the Hungarian 1st Army charged with protecting the “Tatar Pass” began withdrawing from the “Prinz Eugene Line” to the “Hunyadi Line”. Helping to cover the withdrawal were two Tiger tanks obtained from the German 503rd Pz Abteilung. The Hungarian crews would now test the two months of training they had just received at Nadworna. Mobile Russian forces were close behind the retreating column, threatening to turn the orderly withdrawal into a rout.
Attacker: Hungarian (3/1 Tank Battalion, 2nd Armored Division and 24th Infantry Division)
Defender: Russian (8th Tank Division and 317th Infantry Division) 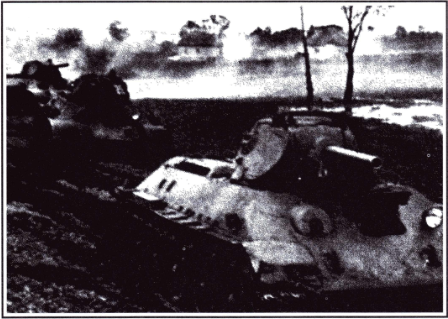