The U.S. 3rd Infantry Division was scheduled to be replaced in the line by the 1st Free French Division at dawn on the 19th. After disembarking the previous day, the Garbay and Raynal brigades of the 11th March Battalion began taking over positions along the Real Martin River Valley from the 7th Regiment, U.S. 3rd Infantry Division, near Sainte-Eulalie and Saint-Nicolas. 11th March pushed along the tracks and crossed over the mountains via the Pas-de-Mathieu pass reaching Valbonne late in the afternoon. Making contact with some local partisans who had been fighting alongside the American troops over the past few days, the 6th Company located the U.S. positions near the farm at Le Viet. As the Germans looked on from across the valley, the Americans began to pack their bags. Taking advantage of the momentary confusion brought about by the GIs retiring, the Azerbaijanis counterattacked. . .
Attacker: German (Grenadierregiment 685 (Azerbaijani))
Defender: American / Free French / Partisan (FFI) (3rd Battalion, 7th Infantry Regiment, 3rd U.S. Infantry Division/Partisans (F.F.I)/6ème Compagnie, 11ème Bataillon Libre) 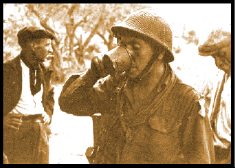