Playtest version - The capacity for the 2nd Marine Infanterie Division to prevent the British bridgehead on the east bank of the Aller River from expanding was virtually at an end. The fragmented units of Marine Grenadier Regiment 6 had pulled back to regroup in the woods through which the British axis of advance lay. On the afternoon of April 14th, the British 4th Armoured Brigade, the Desert Rats, began their push through the woods up Route 209, and east from Altenwahlingen to clear the road to Bohme.
Attacker: British (Units of the 53rd Welsh Division: 160th Infantry Brigade / 6 RWF, 4th Armored Brigade / Gresy, "F" Squadron / 49 APC Regiment)
Defender: German (Units of the 2.Marine Infanterie Division: Mar.Gren.Rgt 6 / II Battalion, Kompanie 4./6 & 5./6) 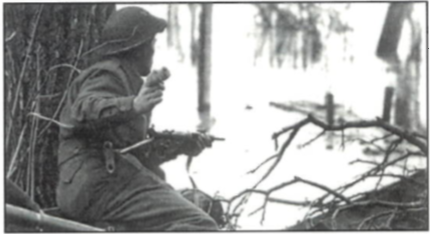