Scenario and VASL map available for free on Lone Canuck website . . .The Romanian General Staff issued Operative Directive No. 31 stipulating the 4th Army was to defeat the enemy between the Dniester River and the Tiligulskiy Bank and to occupy Odessa from the move. It was thought that the heavily outnumbered garrison would surrender quickly. However, Odessa was a heavily fortified position, which thanks to the Soviet Black Sea Fleet could not be cut off. The 34,500 Soviet infantry, cavalry, artillery, naval infantry and NKVD defenders were deployed in three defensive lines, the outer 25-30 km out from the city, the middle and main line 6-8 km, and the inner and last line inside the city itself. The Romanian 4th Army advance, its 3rd Corps had to undertake a frontal attack on the Razdelnaya – Odessa axis, while the 5th Corps conducted a sweeping manoeuvre northwards towards Katargy before turn south. The 3rd Reconnaissance Group of the 3rd Infantry Division advanced towards Razdelnaya and reported that the town was burning and the railroad station occupied by Soviet troops. On 9 August, operations were going well; the 4th Dobobanti Regiment defeated Soviet forces in the Bakalovy area, while the 30th Dobobanti Regiment took hold of the village of Ponyatovka. The 7th Infantry Division occupied the railroad station and the town south of the station; but the Romanians’ fortunes were soon going to change the closer they advanced toward Odessa.
Attacker: Romanian (14th Dorobanti Regiment "Roman", 7th Infantry Division supported by the 7th Tank Regiment)
Defender: Russian (161st Strelkovy Regiment, 25th Strelkovy Division) 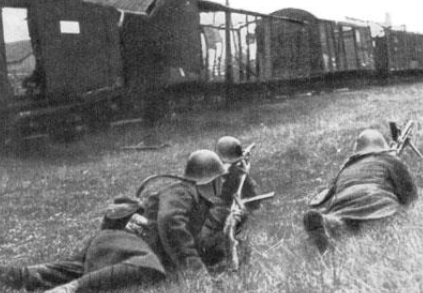