As the vast Soviet forces encircled Berlin, 1st Belorussian Front under Marshal Zhukov was given the “honor” of capturing the Nazi capital. 8th Guards Army and 5th Shock Army jockeyed for positions as they drove through Neukolln towards Tempelhof Airport and the bridges across the Landwehr Canal. On the morning of 26 April, General Krukenberg ordered a counterattack by SS-Panzergrenadier-Division 11 “Nordland” – whose two panzergrenadier regiments had been reduced to the size of battalions. The counterattack was supported by the King Tiger tanks of Nordland’s SS-Panzer-Abteilung “Hermann von Slaza” and the recent addition to the division of the remnants of SS-Grenadier-Division 33 “Charlemagne” – whose 330-some volunteers had followed Krukenberg into Berlin.
Attacker: Russian (8th Guards Army)
Defender: German (SS) (Sturmbataillon "Charlemagne" and SS-Panzer-Abteilung 11 "Hermann von Salza", SS-Panzergrenadier-Division 11 "Nordland" and Hitler Youth) 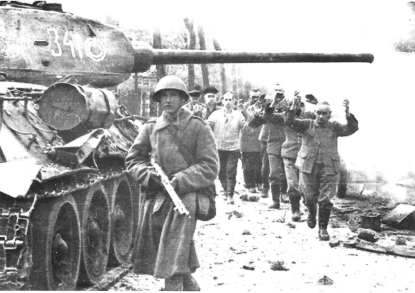