At 0420 the German ship 'Hansestadt Danzig' landed at Copenhagen harbor and a battalion from the 308th Infantry Regiment disembarked. The harbor's garrison troops from the Danish Army, located in the kastellet, were caught unaware and captured and disarmed without any combat. The Citadel was occupied and company elements of the 308th were immediately ordered to the Danish palace of 'Amelienborg', where the king resided. Their mission… 'Advance toward the Palace to put additional pressure on the Danish government'. By now the king's own bodyguard unit, the 'Life Guard' was alarmed and reinforcements were on their way to the palace. Fighting broke out on the arrival of the German infantry.
Attacker: German (Elements of 1st Battalion, 308th Infantry Regiment, 198th Infantry Division)
Defender: Danish (Elements King's Life Guard, Zealand Division) 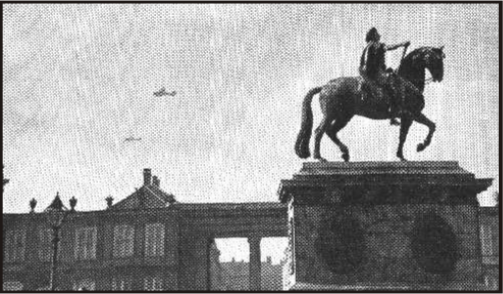